Steve Jordan interviews Chuck Kuhn, from JK Moving Services in Sterling, Virginia—near Dulles Airport, to learn about the company he started at just 16 years of age that is now the largest independent moving company in North America.

So, what were you doing when you were 16? Chuck Kuhn was starting a moving company.  I was intrigued to know why.

Turns out it was the 1970s industry itself that showed him the way. Chuck’s parents worked for the Bell Telephone Company and got the opportunity of a three-year assignment in Iran. “Moving day was an absolute disaster,” he explained. “The movers were late, my parents stressed, and it was snowing.  The movers found a liquor box and, before long, there was a snowball fight, a fist fight, a guy fell off the top of a truck. The police and paramedics were called, and the furniture was left out in the rain. The service at destination wasn’t any better.” 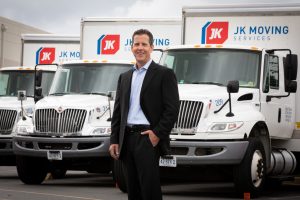 Chuck’s stay in Iran was cut short by the revolution, so he and his brother returned to live with his aunt and uncle in Maryland. His uncle had bought a small moving company and Chuck worked there after school and at weekends. When he turned 16, and got a driving licence, he bought his own truck.  And so, the scene was set. “I thought for sure we could improve the customers’ experience and also thought it was a good way to get physical activity and make some money.”  That was in Fairfax, Virginia in May 1982.

He didn’t have any money for advertising so he would drive through the suburbs after school looking for ‘For Sale’ signs. “Once I had a few jobs I hired a couple of employees,” said Chuck. “In summer I was doing it full time. During the school year I was doing moves on the weekends and after school. The business began to take off through reputation and we are still doing it today.”

He said a girl from school once asked him when he was going to get a real job.  Today, JK Moving is the biggest independent moving company in North America, it employs 1100 full time employees, more in the summer, has 420 items of rolling stock and over 700,000 sq ft of warehousing. “It is my real job.”

What made it work?  “We have been very careful to hire good people,” said Chuck.  “I have tried, from the very beginning, to surround myself with people who are smarter than I am and treat them with care and respect. That has always been our brand promise ‘You will be treated with care and respect’ whether you are a competitor, an employee, a customer, or a fellow motorist. None of us is perfect, but it is top of mind every day.”

For the last 20 years JK has followed seven core values. Chuck has them on his office wall, then again, so does everyone at JK.  What’s more, they follow them:

The company has a diverse mix of business equally spread between private moving, corporate, government, DoD, and commercial office moving. JK also owns the CapRelo relocation business. Chuck is proud of his company’s reputation. “We have moved presidents and congressmen,” he said. “I think we have done a good job building the business and being good, fair, honest competition. We live to our core values and I believe we have a stellar reputation.”

And what does Chuck believe his company can bring to the network? “We’ve been in OMNI for a little over 18 months, in that time out of 97 members contributing tonnage, as the new guy, we are ranking number eight.  So, I think we are going to bring the network a lot of good tonnage, a lot of high-value clients and a representative in Washington, DC that can provide tremendous coverage and service.”

JK Moving is enthusiastically involved in charity work.  Its biggest project is the JK Community Farm that grows food for distribution through charitable institutions locally. It’s run by Chuck’s daughter, Samantha. It’s clear how that helps other people, but what’s the payback for JK?  “I don’t know where to start,” said Chuck. “It’s helped with staff acquisition and retention and has become a major part of our culture. It’s been very rewarding for every one of us.  Everybody contributes to the community farm and everyone is proud of it.”  It’s also helped on the client side, with many clients volunteering and even running their own team-building events there.”

Chuck Kuhn has built JK Moving into a great success story. One of OMNI’s greatest assets is its ability to bring entrepreneurs together to share ideas and develop innovative solutions to the industry’s challenges.  Although JK’s tonnage will be welcome, it may be in this area that the network benefits most from the contrib