Mark Oakeshott, from Mark Oakeshott Consulting LLC, addressed the OMNI conference in Seville to give his slant on the market, how it’s changing and how movers can be more effective

Mark Oakeshott has been involved in the moving industry all his working life.  He started with Pickfords in 1978 and stayed with the company when it bought Allied Van Lines in 1991 and through the SIRVA years.  He spent a short time working with Crater pioneering video survey technology before setting up his own consultancy in May 2018.

Pressure in a declining market

Starting with an overview of the market for moving services Mark said that he expected the current trend for declining revenue and margins to continue.  He expected the ‘IKEA age’ to cause decreasing shipment sizes and for there to be an increase in short-term assignments and lump sum allowances. 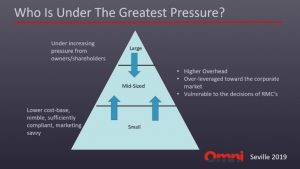 Mark believes that there are currently too many moving companies in the market and so it is ripe for consolidation.  He doesn’t see Amazon as a great threat, even though people spend around $10,500 with the company every time they move, as it’s not their core business.  Uber has recently launched its freight app in The Netherlands which could cause disruption.  Private equity companies are focused on the larger deals and Mark expects more acquisitions by SIRVA now that it has new owners (Dearborn Madison Partners). There will also be continued consolidation between SME companies. “Anyone and everyone is in play,” he said.

The need for financial analysis

The biggest gap between medium and large companies, Mark said, is financial analysis. “In SME companies there is a real need for greater analysis so that managers are making decisions based on real facts.” He said that companies should look to move from fixed to variable operating expenses as much as possible; develop productivity matrices for staff (very difficult in small companies where employees are considered to be family); and understand their operating costs and the cost of acquiring and retaining new customers. Third-party relationships and leases might need to be renegotiated; it might be necessary to downsize; and companies should track the Return on Investment (ROI) on all expenses.

Mark was generally not impressed by the standards of sales and marketing in the industry.  He said the only purpose of a website is to build trust and book moves, so they should be kept simple.  Many sales people take a ‘machine gun’ approach and bombard people with facts without explaining the benefit. “For example, to say ‘All our staff are background checked,’ is not enough,” he said. “If you explain that this means that nobody has ever been convicted of a criminal offense it helps the customer visualize the consequences of not having background checks.”  Mark also said that ‘reviews are golden’ and companies must look carefully at their online reputations.  Accreditations such as FIDI/FAIM are a snapshot, whereas reviews are a live picture of what is happening. Companies should encourage and monitor reviews and respond to them.

Companies should consider diversification both in terms of services offered and the markets served to make full use of their assets. With respect to acquisitions Mark said there are more examples of failed expansion projects and acquisitions than successful ones.  He said that any expansion should be based upon clear financial and strategic rationale, not ego; it was easy to let emotion take over. An acquisition should be backed or supported by current business; having the right leader is essential; you should employ a professional due diligence process; don’t under-estimate the impact on existing resources and financial controls; and take advantage of opportunities.

Finally, Mark had some advice for those considering selling their business. He said that it was necessary to start the sales process two years in advance and recommended the use of an intermediary and a strong lawyer with Mergers & Acquisition experience. Values are based on a multiple of EBITDA, financial reporting should be very clean, sellers should expect to be involved with the business for up to two years after the sale and they should not underestimate the amount of work involved.  Assets should be organized with property placed in a separate company.