Wouter Hijzen, Managing Director of De Haan in The Netherlands, looks at the ways in which the COVID-19 pandemic has affected his business and lessons for the future COVID-19 is not the first crisis we’ve seen since our company was formed in 1777. It probably won’t be the last either. The first contract we signed was with the Emperor Napoleon and, over the years, we have seen our fair share of good times and bad. But we survived and we fully intend to be here in another 250 years. 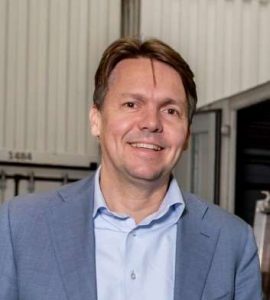 Looking after the cash

One thing that experience had taught us is, during a crisis, cash is king. De Haan has always been a company that preferred to finance its own assets rather than use other people’s money. But as soon as we realised that this pandemic was going to be a problem, we went to the bank. We had just bought new trucks and new containers and were installing 600 solar panels on the roof. But we sold those assets back to the bank because we knew how important the cash was going to be. It was the first time in our company’s history that we had done that. But I believe that has served us well over the last three months. It gave us the breathing space we needed to approach the crisis calmly.

We also introduced some cost-saving measures and we asked our staff to take their holiday entitlement during May. We also told most of our 40 office staff to work from home. But we always looked after our people. That’s our obligation. We didn’t want to pay people for being at home. We wanted them to work. To do that we have operated in an environment of trust.

Most people would say that moving to a new house while maintaining social distance would be impossible. And we agreed. In some cases it is. You cannot have two people moving a fridge, for example, while staying 1.5 metres apart. They try to keep to the rules but, if they can’t, they can’t. But there is one rule they must not break: if they feel ill, they must tell us so we can isolate them and the others in their team. Many of our men travelled in their own cars rather than with the crew in the van. We asked that only one person from the transferee’s household be present at any time. We don’t ask crews to wear masks, unless requested to do so by the client, but they must wash their hands regularly, keep their distance when they can, and wear gloves, not because they help prevent spreading infection but they do stop people touching their faces because it feels strange to do so. During the first week, we had 10 out of our 50 packers staying at home; now we have none.

Working from home has been good for us. When I joined the company three years ago, I tried to get people to work from home but everybody said it couldn’t be done. Now 35 of our 40 office staff work from home. We had an independent survey which showed that productivity, work life balance and happiness were all improved. The only area in which people miss out is the social interaction between colleagues. For that reason we now insist that everyone works from the office one day a week. I believe in home working. Our government guidance says people should work from home until 1 September, but even after that I would like to keep them working from home two or three days a week. With so much
home working throughout the Netherlands it’s saved us a fortune by not having our trucks stuck in traffic jams. We need to keep that going as long as we can. The biggest problem we’ve had with home working is with people logging on at 7am and logging off at 11pm. We’ve had to encourage people to go for a walk! I said, if you want to work until 8pm that’s ok, just don’t expect an answer to your emails.

Throughout all of this I have been very proud of our people who have been more flexible than we ever thought they would be. Our road crews, for example, knew how hard it would be to maintain the required social distance, but also knew I was relying on them. I am very pleased that we have been able to keep the flow of work for them. Within the OMNI community it has been very important for us all to keep paying each other. Nobody is going to go bankrupt because they don’t have enough work, but we will go bankrupt if we don’t get paid. I think the OMNI agents have helped each other a lot by doing this. Some of our OMNI partners even pay up front for us. We have had to become much harder on debtor management: we don’t allow customers to pay late anymore; I just can’t afford it.

I look forward to being able to get together at conferences again, although it has saved us a lot of money with them being cancelled. The thing is, if you don’t go people wonder why, but if nobody goes, you are OK. Longer term, I think the role of conferences will be enhanced by the COVID-19 crisis. Meeting on Zoom is fine, but it’s not like the real thing.